Hit enter to search or ESC to close
Analytics 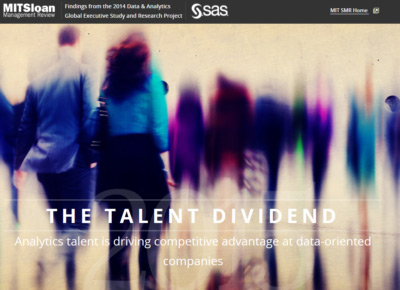 The Data & Analytics Report 2015 by MIT Sloan Management Review and SAS states that talent management is critical to realizing analytical benefits. This fifth annual survey of executives, managers, and analysts from companies around the world revealed findings from 2,719 respondents. It found that companies that get the most out of analytics are much more likely to have a plan for building their talent bank.

In 1974, Colleen Roberts went straight from high school to nursing. In the early 1990s, she completed her bachelor’s degree in nursing when her employer Intermountain Healthcare, based in Salt Lake City, Utah, began actively using data to design patient care.

At the time, she noted that the data were beginning to change behavior – and improve patient outcomes. She also noticed that she enjoyed working with the data. “I was interested, and it was a challenge, and I like the challenge of course,” she says. She always wanted to get more education and a divorce motivated her further. She also found out that the demands of nursing were placed on her over time. So in 1998, at the age of 42, she began working at the University of Utah on her master’s degree in clinical informatics. She felt out of place – she was neither young nor a programmer. But she knew how clinicians work, and she knew how to use the data. She earned her master’s degree in 2002 and became data manager for the cardiovascular clinical program at Intermountain.

The research and analysis for this report was conducted under the authors’ leadership as part of a research initiative of the MIT Sloan Management Review in collaboration with and under the auspices of SAS.
As a data manager, my greatest task was to mediate between people who talk about clinical and people who talk about information systems,” says Roberts. “They need help translating. She was a particularly effective translator, because on the IT side she was able to explain the challenges that doctors and nurses face in caring for patients. And when I told doctors and nurses that I had been a nurse for 25 years, I suddenly gained their respect and willingness to listen to what I had to say. I wasn’t just an IT person who didn’t understand her world.

© Copyright 2022 Signifikant Solutions AG | Made with ♥ in Switzerland